A Quick History of Gutters

Has it been a while since you’ve had a history lesson? Whether it was fairly recent or decades ago, get ready to get a history lesson today! We’re going to be discussing the history of gutters and how they’ve evolved into what they are today. Keep reading to learn about their invention and product evolution to learn something new!

Did you know that gutters date back to the Romans? Back in 47 AD, the Romans brought the concept of gutters to Britain. There isn’t a ton of information about the ancient technology used, however, they were constructed of bricks that were made from clay. This early technology was used to drain excess water away from structures.

This early technology evolved into the concept of gargoyles between the 10th and 13th centuries. While most think of gargoyles as a way to protect buildings from evil spirits back in medieval times, they were invented to collect and drain water away from the roof of a building. Most gargoyles had openings in the mouths of the structure where the water drained from (designs varied from dragons to cats and everything in between). The invention of gargoyles was developed with the same concept as gutter systems today, intending to collect and drain water away from a structure.

After the downspout used on the Tower of London did its job, gutters became mainstream on most building concepts. As the popularity of gutters continued to rise and they were used on more buildings, more materials became available including cast iron and wood. It wasn’t until the 20th century that more durable materials and designs were implemented, thanks to the invention of metal rolling machines.

After the invention of the first metal rolling machine, builders switched from materials like cast iron and wood and made gutters and downspouts out of steel. Metal rolling machines allowed the steel to be rolled into a half-round design that allowed more water to enter the gutter as opposed to previous designs. Eventually, it was discovered that steel corroded easily so builders switched to aluminum and vinyl.

The Invention of Seamless Gutters

By the 1960s aluminum was used for most gutter systems. Inventor Art Knudson developed a machine that was able to cut gutters in one seamless piece. Seamless gutters rose in popularity since they minimized leaks with the absence of seams. The machine invented by Art Knudson allowed builders and gutter installation companies to cut seamless gutters from aluminum into k-style gutters, otherwise known as open 4”-5”-6” gutters. Over sixty years later, seamless gutters are still used and remain the most popular choice among homeowners.

Since the 1960s, the designs and styles of gutter systems have evolved and more and more options are available to homeowners and builders. From traditional open-top gutters to k-style gutters, gutter filters and screens, and covers, there are many options for homeowners. While homeowners have many options to choose from, nothing is as durable and effective as the K-Guard System.

The K-Guard Leaf Free Gutter System works better than traditional gutter systems and gutter screens and filters. Constructed of heavy-duty aluminum, our seamless gutter system has several components that work together to flush large amounts of rain and meltwater through the system at a rapid pace, keeping debris and pests out. One component of our gutter product is our curved hood that keeps debris out and allows it to simply slide off the gutter system rather than enter it, preventing clogs forever. Our oversized downspouts and gutters allow more water to flow freely faster than traditional half-round gutter systems. Our gutter product is so durable that it’s backed by three-lifetime warranties!

While gutter screens and filters offer some protection, they don’t block all debris from entering the gutter system. Often gutter screens and filters act as shelves and collect larger debris that ends up weighing down the gutters, resulting in possible gutter separation and sagging/overflowing gutters. Likewise, smaller debris like seeds and silt can slip through the tiny openings of the gutter screens/filters and often result in little trees and weeds growing and sprouting from the gutters. All a plant needs to grow is a seed, soil, sunlight, and water – all things that are easily found and readily available in a gutter system with a screen/filter installed.

Traditional sectional gutter systems, gutter screens, and filters don’t prevent ice dams from forming. Snow and ice can still enter the gutter system, resulting in the possibility for ice dams to form. All of this is eliminated when you install the K-Guard Leaf Free Gutter System.

We offer free in-home estimates that include a detailed analysis of your current gutter system along with estimated costs for installing your K-Guard Gutter System. K-Guard proudly offers our gutter installation service to homeowners in St. Louis and surrounding areas including, but not limited to, the following locations:

How to Deep Clean Your Gutters This Spring

Get a Free Estimate! 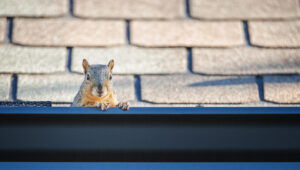 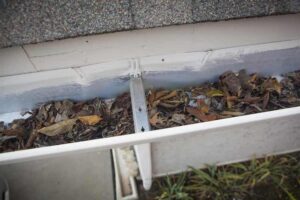 Just like you do plenty of research before purchasing a new vehicle or home, you 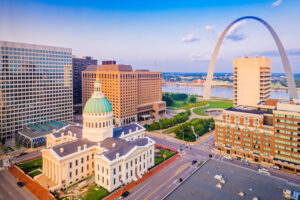 Summertime is one of the best seasons, especially here in the St. Louis area. Our